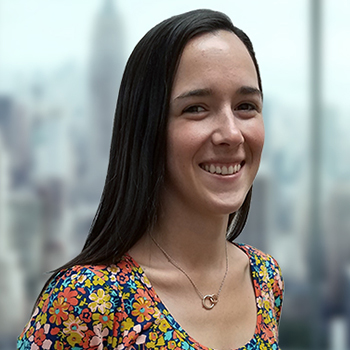 Autumn Groleski is an Allegion industrial designer who recently received her fifth U.S. design patent; this one for her design of the Greenwich lock escutcheon for the Schlage® Control door lock.

Groleski first joined the Carmel, Ind.-based Allegion team as an intern in 2012, and she later returned as a full-time designer in 2013 after receiving her industrial design degree from the University of Cincinnati.

Groleski secured her first patent in 2015 for her adaptation of the Camelot lock escutcheon to the Schlage Touch product. Groleski was able to take the classic look and feel of the Camelot design and merge it with the new technology and innovation of a touch screen residential door lock. “It was a fun project. I was able to keep that historic Camelot look and put it into one of our most updated products,” Groleski explained.

In total, Groleski has been issued five design patents, four for her aesthetic work on Schlage products and one for her work on an LCN product. Although her issued patent total is now up to five, Groleski has submitted more than 20 additional product designs that could later receive the same certification. “There are a lot of other designs that are still waiting. It’s kind of cool because almost every project that I’ve touched at Allegion has had the potential to become a patent,” she explains.

Groleski also enjoys seeing what other people have to say about the product she designs, “I just recently started reading reviews of some designs that I have done on Amazon… I don’t know why I have never done that before, but it is a lot of fun to see what people have to say.”

Learn more about Allegion thought leaders and careers in technology.